NecroQuest was created to be a hyper casual mobile adventure game. We wanted limited controls (Toggle stick, 3 ability buttons, and tap to walk) but still allow the player to explore new areas, use interesting abilities, and command their own team of Cronies. On our small team I was the game designer, level designer, writer, and unit designer. Overall the project was a great learning experience for all of us on the team. A scrapped ambitious customizable village system taught me an awful lot about small team development through remote communication. My major take away was, at the end of the day, the most important thing when making a game with other people is to be able to communicate effectively together.

​In NecroQuest, you play as The Death Knight, a mysterious and powerful being that has just awoken to find himself in the afterlife already at the command of a single Crony (Characters that can accompany Death Knight on missions). Clear levels to acquire more Cronies, unlock new abilities, and command your army! When a level starts, Cronies automatically advance toward the nearest enemies hungry for battle. You are able to walk with a joystick and will automatically attack when not touching the joystick and an enemy is in range. The Death Knight has 5 different tiers of dragon to summon, ranging from baby to full grown. He can heal himself for a significant portion of health, and he has a knockback fear ability. Each Crony that can be acquired has unique stats and behavior as well. Some teleport, some become enraged, some speed up significantly, and a select few summon minions of their own.
4 Core Design Goals:
The project was 2.5 months of part-time remote work for the team at Startale Games, LLC. Our design goals were the following:

1 ) Hyper Casual:
This game needed to be able to handle very casual player interactions while still advancing the player, level to level (until their current team cannot complete a level. Then, they are returned to the hub world where they may upgrade and choose their Crony team). Also, minimal controls, so the player can easily multitask while playing the game. Our intentions with aiming for hyper casual were to accommodate players who would be playing while walking, watching tv, between auto-chess games, etc.

2 ) Create a sense of adventure and exploration while maintaining Portrait orientation.
We needed all the interactions with the game to be completable and readable while holding the phone with one hand. We also had to be aware of what the player would be revealing while exploring the map. The maps naturally became taller and thinner, most likely due to enemies needing to be placed in such a way that the player wouldn't be constantly flanked from the sides. This allowed the side areas to become spots for hidden chests or other collectables.

The main character (The Death Knight) has 7 increasable stats:
Each stat begins at level 1 with 100% effectiveness.
Each time a stat is ranked up, it increases a certain amount depending on the stat.
Below, I will be giving examples of values from the game that resulted in good balance.

We have the enemy scaling non-linearly to ensure the feel of the game constantly changes. The same technique shouldn't work through the entire playthrough.

4 ) Unique activatable abilities for the main character and unique passives for Cronies
From the beginning we knew this was going to be a game about levelling up your team as much as completing the levels. To make levelling up interesting for the player, we give them 2 tokens, each level-up, to spend on 2 of their Main Character's 7 upgradable stats. Also, the Cronies they collect along the way need to be unique and upgrade meaningfully. Below are what I designed and implemented through the editor.

Death Knight Abilities:
My goal here was to make 3 unique activatable abilities for the Death knight, each with 5 tiers to upgrade through.

Crony Passive Abilities:
Many of our Crony characters have abilities that activate once their mana has regenerated in addition to their auto attacks.
The abilities include:

Rage: When Rage activates, it triggers a search in a radius around the character and blows any enemies in the area back while stunning them for a few seconds. Then, for 45 sec the character is 1.5x their size and do increased damage.

Spawn: When activated, the character summons another smaller Crony. The character cannot summon again until their mana has regenerated fully and their last summon has fallen. Some summon smaller versions of themselves, some summon dragons, some summon basically just temporary meat shields.

Back Stab Dash: When activated, the character does a large radius search around itself and then dashes behind the nearest enemy and does a huge damage back stab.

Temporary Invincibility: These Cronies grow golden and are given increased attack speed for some time. During this time they cannot take any damage, but can still be moved by enemy attacks.

Fury: When activated, the character slightly increases in size, movement speed, attack damage, and attack speed. The skeleton in purple has Fury as an abilty.

Stun Smite: When activated, the character does a radius search around itself and zaps the nearest enemy. The hit enemy cannot move or use their weapons for 5 seconds.

Ignition: Cronies with ignition wield weapons that, on-impact, set their target ablaze. Most notably is the archer that runs around constantly consumed by flames.

The graph below shows the growth lines, per statistic, for Cronies and Enemies 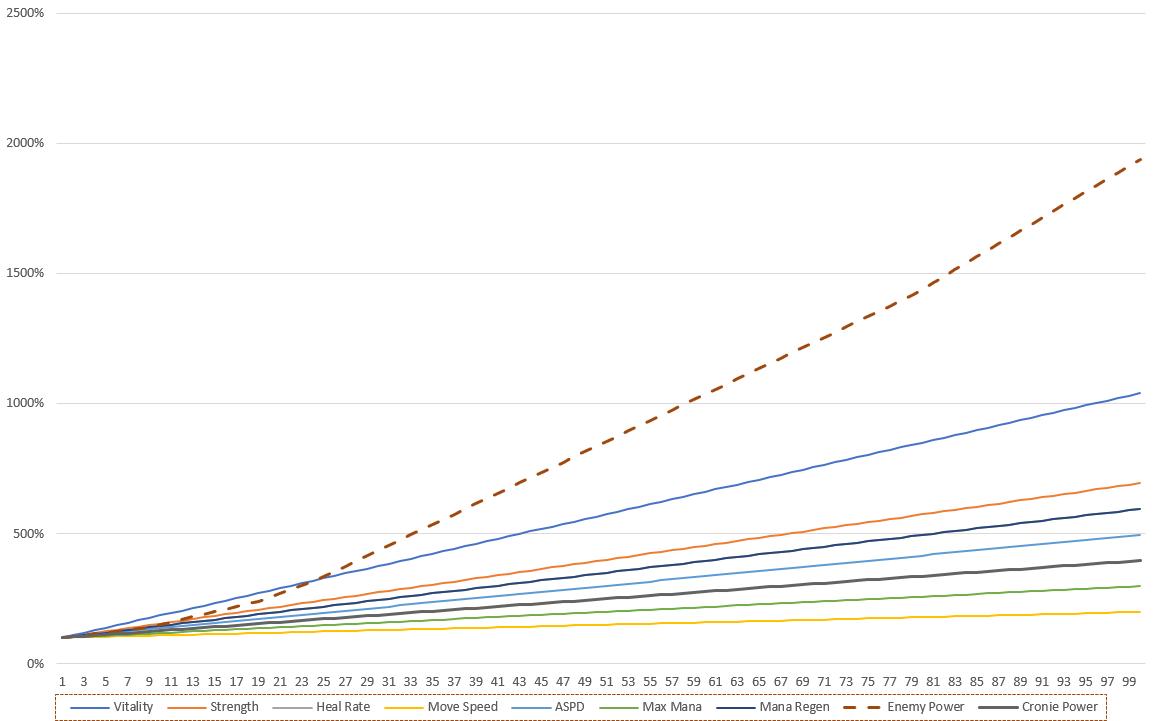 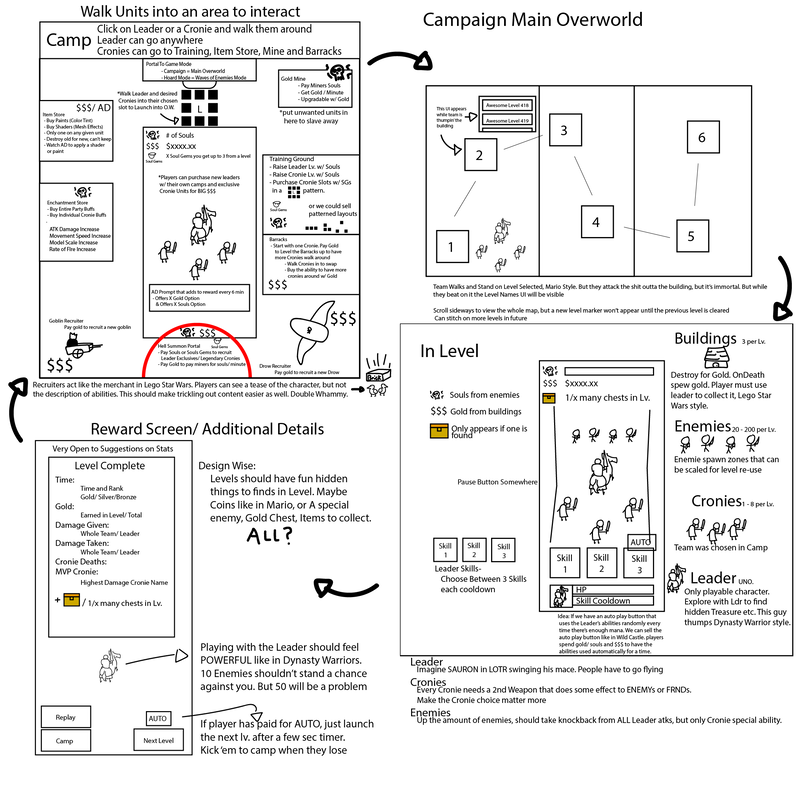 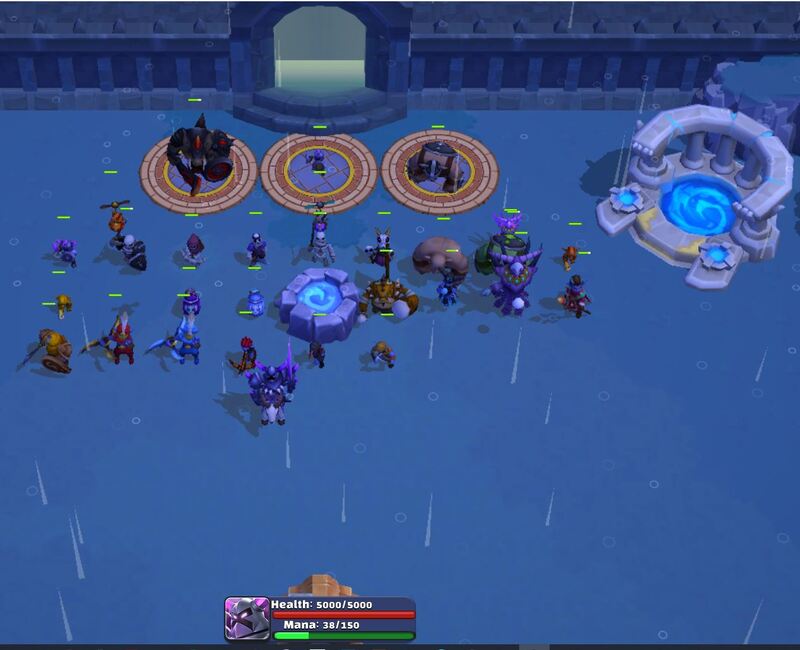